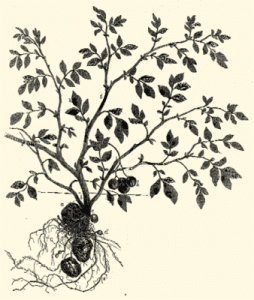 To this day, all over Ireland the landscape bears mute testimony to the events that occurred in the horriﬁc period from 1845 – 1850. Starvation graveyards offer silent tribute to the millions of Irish men,women,and children buried in unmarked mass graves. Thriving villages were replaced by heaps of moss-covered stones. Although historians have not agreed on the numbers who perished, most estimates range between one and three million.

Following the passing of the 1800 Act of Union, which abolished the Irish Parliament, Ireland was included as part of a “United Kingdom.” However, this change in status did not result in equal treatment of the Irish. When the potato blight struck, British government measures to mitigate the Irish starvation were limited by an economic ideological straight-jacket favoring laissez-faire policies over human and social needs. British public opinion suggested that the ﬁckle Irish had brought this disaster upon themselves. People now agree that it was an outrage that Ireland,a member of the United Kingdom,the richest kingdom in the world at that time, should have been brought down by starvation in an era of comparative peace and relative plenty.

Today a growing number of historians believe the term “famine,” often used to describe the lack of food leading to this desolation, is totally inappropriate. Although it is certainly true that the fungus eliminated the potato as a food source, it is also true that only one crop failed. While her people cruelly suffered, Ireland was producing more than enough food to feed them, but food was being removed at gunpoint by Queen Victoria’s troops garrisoned in Ireland for this purpose. In 1847 alone, 4,000 ships carrying £17,000,000 worth of foodstuffs, 10,000 head of cattle,and 4,000 horses and ponies sailed to England. That same year, etched in memory as “Black 47,” saw 500,000 Irish people die of starvation and related diseases. Back…