In hopeless circumstances at home, the Irish ﬂed their homeland by the hundreds of thousands each year. From 1845-1855, nearly a quarter of the population emigrated, mostly from rural, Catholic, often Irish-speaking areas of Ireland. They ﬂed to England, to Australia, and in greatest numbers to North America, seeking new homes in Canada and the United States. Thus began a pattern of emigration that would become a psychic trauma in Irish life for over a hundred years.

There had always been a migratory pull to the New World of the Americas. The Irish had played a major role in the earliest days of colonial life in America, but those Irish were driven by a sense of opportunity and adventure in a new world. During the starvation years, the exodus of the Irish was driven by desperation.

At the height of the Hunger Migration, the ﬁve-to-eight-week journey was especially perilous. The most desperate took unprecedented winter crossings to Canada on what came to be called “coffin ships” where fever and typhus became unwelcome shipmates. Many of these ships were cargo vessels used to bring lumber from Canadian forests to build English cities. Now Irish immigrants served as human ballast in the holds of these ships for the return trip. Thousands perished on the journey or in quarantine stations on arrival in the land they had hoped would save them. Historian Cecil Woodham-Smith writes, “The thousands who poured over the Atlantic in 1847 were fugitives, a helpless horde of the kind which ﬂees from a bombed town.” Despite the trauma of the journey, they continued to come and would do so for generations following The Great Hunger. Back… 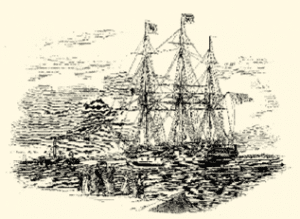