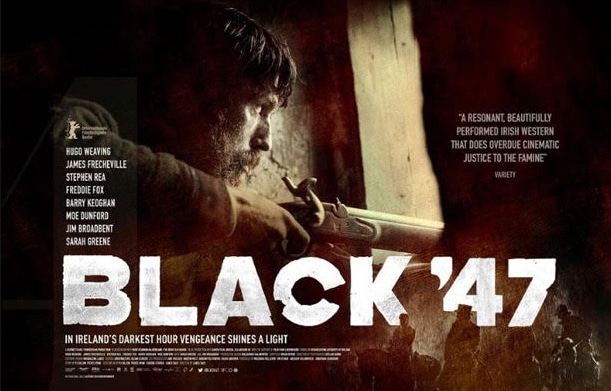 Tuesday, October 9th – It’s finally released and we have been eager to see it, Black ‘47, set during The Great Hunger, (1845-1850) follows an Irish Ranger returning home to Ireland after deserting the British army in Afghanistan. The Ireland he once knew is now a land full of death and despair, causing him to set out on a vengeful quest.

Critics were split on their reviews of the film; some claimed it felt like a typical Western movie focusing solely on retribution. Others praised the use of spoken Gaelic and the bleakness depicted, which marked An Górta Mór. Despite mixed reviews, critics came to a consensus on one thing: a movie depicting this period in Irish history was immensely overdue. It is groundbreaking for this reason alone.

The photography also stands out and plays a big part in the somber tone of the film. So, if you want to see this film on the big screen (where it will shine) – a film that explores the concept of revenge set in one of the darkest times in Ireland, you can currently view Black ‘47 at the Roxy in Philadelphia, but probably not for long and on a big screen We think it definitely deserves to be seen.

Showtimes for Black ‘47 at the Roxy, Philadelphia is available at: http://filmadelphia.org/nowshowing/?exclude=&month=October+2018#.

For further reviews of the film, go to https://www.rottentomatoes.com/m/black_47/.