The Lessons of the Great Hunger

The Lessons of the Great Hunger 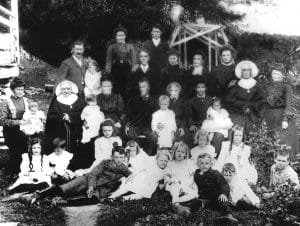 This memorial commemorates the struggle and pain of those Irish who ﬂed their homeland in the face of a hunger of catastrophic proportions. It celebrates their courage and honors them for opening the door for others. Their story springs from one dark period in the history of a distant island, but their journey and arrival changed the face of American life and forged an enduring link between Ireland and America.

As it was for the Irish long ago, America remains a hopeful refuge from suffering and injustice. The Irish experience, its traumas and its triumphs, stands as a model from which we can learn and grow. “The Irish, by being the ﬁrst and the largest urban minority group with which American society had to deal, and by working their way into the general society, would constitute an example for the array of other immigrants who would follow them.” (Dennis Clark).

In 1994, speaking at the site of a quarantine station at Grosse Isle, Quebec, where 5,300 Irish died in 1847, Mary Robinson, President of Ireland, challenged her listeners to be participants in history rather than mere spectators: “If we are participants then we realize there are no inevitable victims…. If we are participants, we engage with the present in terms of the past.”

In looking at this monument on the edge of a river in a great American city, we honor the past, but we are also challenged to look at the present and to the future. For the most part, the children and grandchildren of the Hunger immigrants have prospered and are grateful for the bountiful blessings of America.

We must be mindful that prejudice still exists, especially toward newly arrived immigrants. Let this memorial serve as a beacon of hope to all who come here. To them we say in greeting: “Céad míle fáilte!” One hundred thousand welcomes! Back…